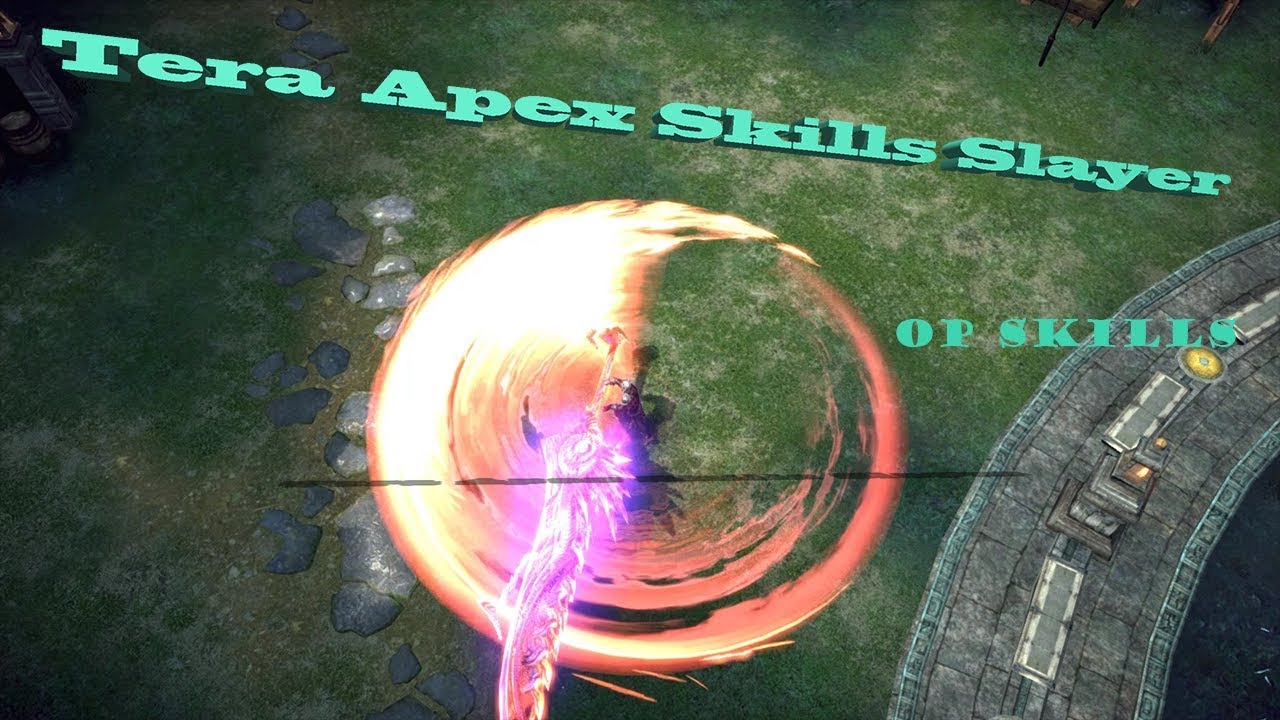 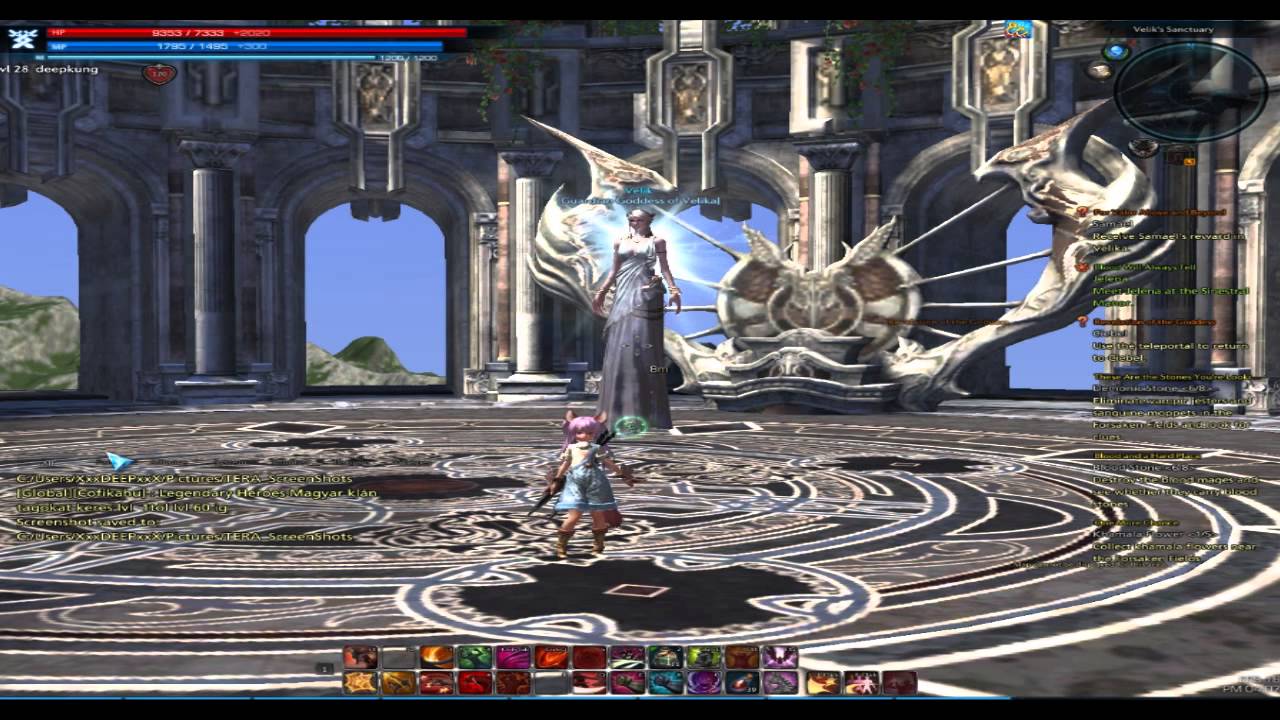 Talk to Meren to get the next quest step. She'll tell you to go run Echoes by talking to Murakan. Obnoxiously, he doesn't show up as a quest marker.

Go back to the Redeem teleport area and turn away from the NPCs. There's a set of five NPCs standing near some steps. Murakan is located second from the left.

Talk to him to get into the Echoes of Arcana instance. Murakan and Echoes of Arcana is not marked on the map with a quest marker. He's a Baraka located next to four other NPCs near some stairs in the courtyard.

The instance itself is pretty straightforard. Interact with the crate at the end and then the Echo Arcana object to progress the purple questline.

Talk to Gadin to get a few mats. He's marked as a Story quest red instead of part of the Pre-Apex quest so it might not matter. The gold you get will cover the enchanting costs.

Use the materials to advance all your gear evenly or just your weapon for now if you are comfortable with your class already.

The backstory of the pre-apex quest is you're running around chasing down stuff for the Banquet as well as collecting stones for the eternal crown.

You have to kill 3 of each of the 3 types of low-tier BAMs near the camp. Basilisks, Ovoliths, and Orisks. They are also associated with three different Vanguard Requets but the requests require 10 of each.

There's 8 channels on IoD so if it's crowded on one, swap to another for an easier time. The BAMs should be pretty easy. It only lasts a minute and stops working if you leave IoD.

The green crystal formations also buff you a bit. Interact with them to get the buff. Sometimes, a Caimen thief will spawn from the crystals.

Kill him to get the Caimen chest, which your vanguard reward key will open. It's usually a ruby or some metamorphic emblems, but sometimes you get crafting designs and other materials.

Celestial Arena is a solo instance where you fight a few waves of mobs or play a mini game in a given wave.

It should take about 5 minutes to do a round. The loot table was buffed recenlty in the last six months and you can actually farm Stormcry materials from it if you score well enough.

You'll go through five waves of some combination of mobs and minigames. Pay attention to the text prompts to see what you're supposed to do.

You get points for the number of mobs you kill and how fast you complete the instance. Your points at the end will determine what tier of rewards you get.

Seriously, if you didn't enchant up to now, you should do so. You have to use at least one of each of the foods Olivung gives you between each set of BAMs to progress the quest.

You'll actually need to kill 10 of each this time instead of just 3. But you also need to talk to Olivung in between each set so don't forget to do that before you go to the next set!

The buff food you get isn't great so don't feel like you need to save it. Don't be afraid to use the Bravery potions you've been getting to help with killing the BAMs.

Also remember you have a couple of Olivung teleport scrolls, so you can save a bit of travel time by using them to get back to him at the end of the 2nd and 3rd set of BAMs.

This used to be the point where you ran the ACE dungeons but since they redesigned the Barcos and Akasha's to be for FM and SC gear drops, they are no longer at this step.

Instead, you. The step says to "Speak to Atpeman" but they must have forgotten to change the triggers or place the NPC.

Just walk next to the crab to get it to count. Access them by opening your map keybound to 'm' by default , clicking on the Blue Shield button in the top left corner, zooming out if needed, and then clicking on one of the Blue Shield icons on the map.

You'll be asked if you want to teleport there. Confirm and then follow the instructions at the mission. There's going to be a more detailed article on guardian missions to break down the different choices later on.

For now, the basic premise is you do stuff at the mission, either DPS'ing or collecting things or playing Simon Says, and you get points.

You need , points to get a Guardian Legion reward. The DPS ones are actually a bit annoying while you are undergeared so doing the Flight ones may be easier and faster.

The two major DPS ones and the two Flight missions will alternate being active 24 hours a day. The other missions are on weird intervals and you'll have to wait for them to come up.

When you're upgrading your Weapon and Armor, you'll need to remove all crystals first. You have to equip the items to remove crystals. For the last pre-apex step, you'll fun the Lilith's Keep Ace dungeon instance, called Lilith's Trial..

If you know LK then this won't be too bad otherwise, it might be kinda painful. So keep your cool, watch the AoEs, and hopefully you remembered to enchant your stuff.

Consider using the Bravery Potion consumables you got as well. Please log in again. The login page will open in a new tab.

After logging in you can close it and return to this page. Share 0. Pin 0. How-To Guides. What is Apex? General Guidance In simplest terms, follow the purple quest line that you will unlock upon reaching level Quest Steps Here's an outline of the steps with the gotcha's called out.

Go back to talk to Meren to continue progressing. She'll tell you to go talk to Halran in the Erudar Command. Halran will give you the Regeneration Stone.

Right-click it in in your inventory to use it and restore the Eternal crown a bit. It'll change icons with each stone you apply.

Talk to Halran again and he'll tell you to go talk to Meren, who moved from northern Highwatch to just outside of Erudar Command. How convenient.

Talk to Meren to finish this quest step. Talk to Tamarang near the Pegasus landing platform. Follow the quest marker to Nimotz's Belongings, a pile of stuff next to the Bridge.

Interact with the pile then pick up the item that is produced. Read the note to progress. Follow the quest marker to Timeless Woods camp and talk to Nimotz.

He'll activate the next step. Use the earth stone then head back to Meren. Talk to Meren to finish this quest step and get some more enchanting materials, a Plunder Glyph Box, some Bravery Potion, and a crystal binds.

Remember to enchant your gear! Talk to Meren to activate the next step. Talk to Bethania near the Echoes area. She's marked on the map appropriately.

Talk to Gaderong to go into the Celestial Arena instance. Once in the instance, you'll talk to Bethania again then Gaderong to activate the waves.

The guild quest system changed in a couple of ways with patch The range of options for quest you got was simplified, the time requirements changed a bit, everyone was given start and claim authority after they have been around for at least one token reset at Sunday Midnight, UTC Sunday 8 PM Eastern Daylight Savings, midnight UTC.

The quest limit was changed and individual rewards were added although they are gated on the shared guild token progress for the week.

Based on a commenter's notes regarding small size guild quest data, it looks like the small, medium, and large guild sizes all share the same values.

Leave a note if you have info on a medium guild so this can be confirmed. Correction: Small guilds get a tokens per week cap, mediums get , and large get There are now 5 quest types to choose from and their goals were greatly simplified.

The quest types are:. The amount of things you have to do for these quest will vary depending on your guild size. You can no longer pick small, medium, or large.

Authority from the appropriate rank setting is required to cancel a quest. Note that cancelling a quest has no penalty besides losing the progress on that specific quest.

This differs from the old system where cancelling a quest would use up one of your 5 daily quest limit. You can have all five quests active if you want.

When a quest is completed and claimed, you can restart the quest immediately. You will not be able to activate more quests once you max out on potential Valderon tokens for the week.

However, you can cancel a quest in progress without any penalty. This can be useful if you want to free up some potential tokens to pick a different quest if you are at the weekly limit.

If you are 30 points away from max and you have a 30 point quest open, then you won't be able to activate any others. The Valderon Token system was added with this patch.

The old guild funds and guild points system are still in place. With the token system, each character in the guild that has been present for a week can claim individual rewards as the guild completes enough quests and builds up enough tokens.

The "Confirm" button is actually the "close" button. To claim a box, click on the download icon to the right of each reward tier.

Large Guild Reward Chest I. You get rubies and one of the following item types:. Same base loot table as Chest I with the following added:.

Same base loot table as Chest II with the following added:. Each quest completed will add tokens to the guild total.

Everyone in the guild shares the same token count. When the token count reaches each of three different point requirements, individual rewards are unlocked for claim.

You can claim all three rewards in any order once the token threshold is reached. You don't have to contribute to guild quests to claim rewards but you do have to be in the guild for a week before you can claim rewards.

The boxes work like loot boxes - you get a fixed reward and then you can pick from one of four boxes to get an additional reward from the item loot box.

The loot tables appear to be the same between all guild sizes although the box item id's and names are unique for different guild sizes.

You can also claim the items on every character you have in the guild that has passed the "been present for one token reset" requirement.

Here's the quest info for a large guild. Waiting on specifics for medium and small guilds. Since you can no longer claim quests once the tokens are maxed out each week, doing only boss monster quests will be optimal for guild XP grinding.

You'll be able to do turn-ins before you hit Valderon tokens and you'll get guild XP. This would take clears of any three boss dungeon to complete. This is more than you would have been able to make in XP each week under the old guild quest system.

If you fish your way to max tokens then you'll get guild XP each week. But it will take considerably less focus than clearing the same amount of dungeons.

The Echoes bosses will probably also count but it takes longer to run than the other solo instances. This can be useful if you don't get enough dungeon runs between your guild members to max out on boss hunting quests.

Small guilds appear to have the same stats you have listed for guild quests.